You are here: Home / Vegan Condoms

Vegans want to remove as much cruelty and exploitation to animals as possible so remove meat, fish, eggs, dairy, leather and even honey from their lives.

Are Condoms Vegan? Most certainly are not, the process of making Latex involves Milk Casein, a dairy-derived product which means that standard Condoms are not suitable for Vegans.

Luckily for Vegans, Vegan Condoms are available from

There are 3 Vegan-friendly Condoms from Durex which include Avanti Ultima, Featherlite Ultra and Deluxe.

Avanti Ultima Condoms use a cutting-edge polyisoprene material which is thinner than standard Latex and is also suitable for those who are sensitive to Latex. They are a standard length with a width 53mm.

Durex Featherlite Condoms have been constructed from natural hypo-allergenic rubber latex, a very thin ultra-light material which gives you and your partner increased sensitivity during Sex, the Condoms are shaped with a flared head and are clear in colour.

Durex Deluxe have been constructed from Polyisoprene a Vegan-friendly material which has excellent heat transfer properties which improve intercourse, a natural colour.

Fair squared Condoms are manufactured in Germany from Fair Trade ingredients and materials using a process that eliminates Casein which makes these Condoms suitable for vegans.

Five different Condoms are available from Fair Squared which include Original, which are standard sized  Ultra Thin, ultra-thin condoms with a thickness of 0.055mm Sensitive-Dry, condoms without lube, XL 60 extra long and wide condoms Max Perform includes a built-in Penis Ring for extra stimulation and safety.

Glyde Condoms originated in Sydney, Australia and had been specially made for the Vegan Market they are certified by The Vegan Society which means they are Vegan guaranteed. Glyde Condoms feature a patented double dipping technology.

Made from 100% natural rubber latex with a non-spermicidal lubricant.

Available in 4 different sizes in a range of colours and flavours.

Sir Richard’s Condoms are Vegan Certified and Peta approved, made from 100% natural latex material which is free from casein, glycerin, parabens, petrochemicals and spermicides. 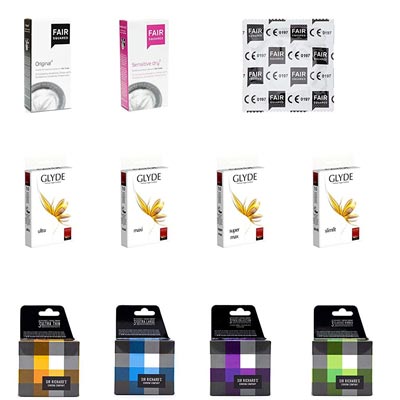