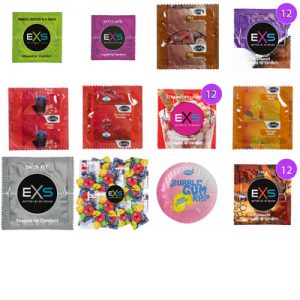 While most condoms are at least 0,065mm thick, the new EXS Air Thin revolutionizes the condom market. LTC Healthcare managed to manufacture one of the thinnest latex condoms of the world with 0,045mm thickness using state-of-the-art technology to stretch the latex to the maximum while keeping its natural and untouched strength. The result is EXS Air Thin: an ultra-thin condom giving unprecedented feeling and sensitivity. Each condom is electronically tested for extra safety.

EXS Black Latex condoms are silicone lubricated natural rubber latex condoms. These condoms are black and anatomically shaped for a better fit. They are 100% electronically tested and come CE certified.

EXS Bubblegum Rap condoms smell just like bubblegum and without any rubbery smell. This innovative condom will add fun to your sex life with its fabulous aroma, flavour and funky round packaging

EXS Crazy Cola condom comes from the EXS Taste the Difference Range. With a cola flavoured lube, these condoms are sure to get your taste buds bubbling!

This product was designed by EXS to help enhance lovemaking and avoid premature ejaculation, so the excitement lasts even longer every time. As the condom does the work for the wearer, he can relax and enjoy the moment without worrying.

It prolongs lovemaking and increases performance through the use of a mild anaesthetic cream which helps to delay climax. Delay Condoms are created to the exacting quality specified by all products from EXS, and they meet all existing safety standards.

EXS Extreme 3 in One

The EXS Extreme 3 in One condom is ribbed and dotted to increase your partner’s pleasure. This condom also has a flared shape to provide extra stimulation to you and your partner.

The EXS Hot Chocolate condom comes from the EXS Taste the Difference Range. This condom has a strong and authentic hot chocolate flavour. Highly recommended to try!

Are regular condoms way too small? Size does matter? Than the EXS Magnum condoms are just the right thing for you!

EXS Magnum condoms are larger than regular condoms, silicone lubricated and made from latex. They will help you to feel comfortably protected and assure the same safety as a regular condom.

All EXS Magnum condoms are electronically tested to reach the European standards of safety.

The EXS Orange Soda condom comes from the EXS Taste the Difference Range. These condoms contain a unique orange soda flavoured lubricant, added to increase the taste and smell sensation, unlike other brands that have little or no taste.

he EXS Smiley Face Condom offers great protection, comfort and stimulation as these condoms are designed to fit comfortably over the penis, and are teat-ended for easy appliance and removal.

EXS Snug Fit condoms have a slightly tighter fit for men that find that regular condoms slip off during intercourse. The condom is 3mm narrower in shape than the average condom measurements, just enough to offer more contact for as long as it is needed.

Snug Fitting condoms can delay male sensitivity and delay ejaculation. They provide a natural skin on skin feels while providing maximum protection during intercourse. All EXS Snug Fit condoms are electronically tested to reach the European standards of safety.

Use The Condom Calculator